If the skirt fits

Well, break out a slab of SOLO, slam it down fast and add my name to that lofty list of real men. Finally, I can roll a kayak!

Oh no, don't tell me you don't remember the SOLO Man? 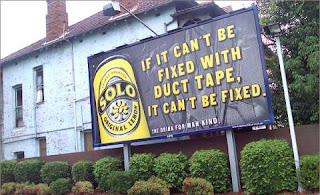 Alright punters, firstly, SOLO is a lemon soft drink, which has been around in Aussie fridges for at least three decades. And anyone who watched TV during the 80s couldn’t possibly have missed one or another of the SOLO Man ads. I think the original had him taking on the rapids in a one-man inflatable raft. The iconic version, however, was the same moustached hardcore guy stuffing a can of SOLO in his jacket before jumping in his kayak, taking on a steep descent through God-knows-what-infested jungle, and finishing with a breathless drop off a waterfall. The ad concludes with him guzzling SOLO, the SOLO mostly spilling out the corners of his mouth, and the overture, "Light on the fizz so you can slam it down fast". They don't make ads like that any more.

The SOLO Man was a real man, and obviously, real men kayak. Which obviously makes me a real man. Yeah. Subsequent SOLO ads didn't quite cut it, except maybe for the one with some guy (not the original SOLO Man) wrestling with a croc that tried to steal his SOLO (there was a kayak in there somewhere).

Don't take the moral of the story as SOLO being your best way to distract a hungry crocodile, though. For that, you need the Crocodile Reaction Action Plan, or C.R.A.P. But that's a story for another missive.

All jokes aside, though, it’s been a great day. Great feeling to stuff myself into a fiberglass boat, seal myself in with a rubber skirt, get in the pool, deliberately remove myself from the living breathing world of air by rolling upside down, feel the tension of not being able to breathe building, and then successfully popping the roll and coming up right and steady. I did it today for the first time, by myself, unattended, and then did it another ten times in a row without failing once. There’s something a little more right with the world when you conquer a little goal, overcome a little fear, and look forward to pushing onto the next challenge.

But my great Friday hasn’t just been about kayaking. It started at 5am when I turned up for work at Quarantine. We’ve got a few projects going on at work, which keeps us busy, and I’m surrounded by positive people. It can be rough when the shift work deprives you of sleep, but otherwise I usually enjoy my morning at the airport. And I had to issue my first fine just yesterday – not that I enjoy taking people’s money, but it went as well as can be expected, and is a little bit of a milestone. Declare your mandarins, folks...

Got home, Skyped my beautiful wife, then headed down to the markets to give Billy the coffee man his new chess pieces. Scored a free mocha for my trouble, then headed off to do my fruit shopping and buy a nose clamp. Yes, a nose clamp – to use when kayaking so less water gets up my nose, and more air stays in my lungs! Home again to put said clamp to good use by jumping in the pool with the kayak and popping my first roll (cue Rocky theme song).

Quick shower and back on the road to a school sports awards evening, where I get a bit of recognition as a chess coach and my students get recognition for their champion efforts during the year. The main event of the evening was a demonstration blitz chess game between a student, the current Queensland under-14 junior champion, and a teacher, a champion swim coach who happens to play a mean game of chess. I had to commentate to ham it up a bit. The student won, but kudos to the coach, he did very well. Exciting stuff! But even more exciting than that, I scored the evening’s raffle hamper! Top day!

How do you beat a top day? By having a top week, of course! I had such a week just this past fortnight or so, when I made an impulse decision to visit Masumi in Japan.

You see, being married is great, but being forcefully separated by 5000km is not. Masumi and I have been doing and planning lots of things that bring our life together closer to reality every day, and you know, it’s all part of our adventure. But just earlier this month, I was booking cheap tickets to Japan for January. We’re going to do our wedding photo session then – so-called MAEDORI is the usual thing in Japan so you don’t have to worry about getting great photos on your wedding day – and we’re hopeful that Masumi will have a visa, so I can escort her back to Cairns. As I was about to depart the Jetstar website, the withered part of my brain that was once responsible for being a little maths whiz clicked briefly into gear and I realised, hey, if we next meet in January, that’ll be five months without having seen each other. Five months without my wife, what the...?!?!?

Booked yet another ticket to Osaka, begged for some leave from work at short notice, and before I knew it, I was headed to Japan on a Thursday afternoon flight. There followed 7 top days in Osaka, Tokushima and Kyoto with Masumi. Great autumn weather, great onsen, great food. I was a bit early for the true fire of Japan in full autumn, but at least it was still warm enough to get around comfortably.

We tried on a few of our wedding suits and dresses – check out the results in these photos, and as you can see, this skirt fits, too! We inspected our wedding venue - also very nice. And we caught one of Kyoto’s great festivals, the Jidai Matsuri. Which I have to say, honestly, is a bit boring, but at least we can say we’ve seen it. Line it up next to Awa Odori, and you’d just as well be comparing a waltz with your grandmother to a rumba with Angelina Jolie. Not that I’d ever rumba with anyone but you, Masumi, sweetheart, if you’re reading this, I love you. Anyway, it was a top week. In every sense of the word, it was a week of consummation. Time together, time to get grounded and reassure ourselves that we’ve done the right thing. Very timely and much needed for us both.

Now it’s back to work and time to get cracking on wedding preparations. Yes, we’re legally married, but we’ll do things properly. In Japan, next northern summer, Japanese style. My side of the family is pretty excited about the whole prospect of being in Tokushima for the dancing season and having a Japan experience like no other. And there’s no such thing as preparing too early for a wedding in Japan, so Masumi and I are already doing up invitations, menus, orders of proceeding... and lots of other stuff that I still have to learn about! I’ll keep you up to date with the adventure!

Which just leaves another 3 months – or 2-and-a-bit now! – before I see Masumi again. A bit of chess, some kayaking on the Barron, Christmas and New Year working at the airport, and before we know it, it’ll be January. No worries. Now where's my skirt?